Pierre - Governor Dennis Daugaard named De Smet as the 2013 Community of the Year at the Governors Economic Development Conference in Sioux Falls on April 16, 2013. Governor Daugaard spoke to several hundred at the conference saying that attracting two new businesses and helping six other businesses expand created some 50 new jobs in De Smet. “That’s equivalent to creating 7,000 new jobs in a city like Sioux Falls.”

De Smet’s Economic Development Director Rita Anderson said “De Smet is a progressive town. We see our community as a work in progress. We firmly believe that there is no status quo - if you are not moving forward, you are moving backward. We see this year as just one year in a continuum of progress. But in that continuum 2012 was a particularly successful year for this forward-thinking community. Goals were met affecting almost every facet of life in De Smet."

The city is enjoying a new city office with plans to expand it. Visitors and residents have more information at their fingertips with the newly designed and coordinated website www.desmetsd.com. Business people are enjoying more involvement and economic benefits with planning through the active Economic Development organization.

New entrepreneurs are moving forward with business plans after being apart of a SDSU/De Smet series of workshops. Young leaders are more involved in the community through the newly formed “Young Guns” group.

The medical community is watching the building of the new dental and medical clinic. They will see their dream of a medical campus come to fruition with the expansion and coordination of facilities.

All of the community is buzzing with ideas and excitement as the school, city and development organization work together to create the new Athletic Complex and Community/Wellness Center. Old and young are joining together in their fund raising efforts. Three new businesses and six expanding businesses are infusing the community with new jobs, security and economic stability.

Yes, indeed, 2012 was a very good year for the community of De Smet, South Dakota. But it is just one year in their pursuit of providing the very best of life in the small town atmosphere that we all cherish...and where things are always happening and moving forward!”

De Smet was also named SD Community of the Year in 2002.

KSFY- TV selected De Smet as a 'Destination Get- Away.'
They did live news broadcasts from the Ingalls Homestead.

Tri- State Neighbor featured De Smet
in their Sept. 18, 2015 magazine with "Little Town backs up its lofty dreams with action" article. Relating the story of how De Smet built its new Event & Wellness Center through hard work and donated funds. Editor Bruce Falk says, "It's an impressive building, one that would draw raves if it were in Omaha or Des Moines. But it's in De Smet where forward- thinking citizens donated time, effort and money to make it happen."

Ward's Store named one of the '7 Charming General Stores in South Dakota'
that will make you feel nostalgic by 'Only In Your State' on Facebook.

Tree City USA
De Smet has been named a Tree City USA by the National Arbor Day Foundation for 14 years in a row. Tree City USA began as a 1976 Bicentennial project to recognize US towns and cities that develop comprehensive urban forestry programs. There are thousands of Tree City communities across the US and De Smet is one of 30 in South Dakota.

To become a Tree City a community must meet the following four standards: 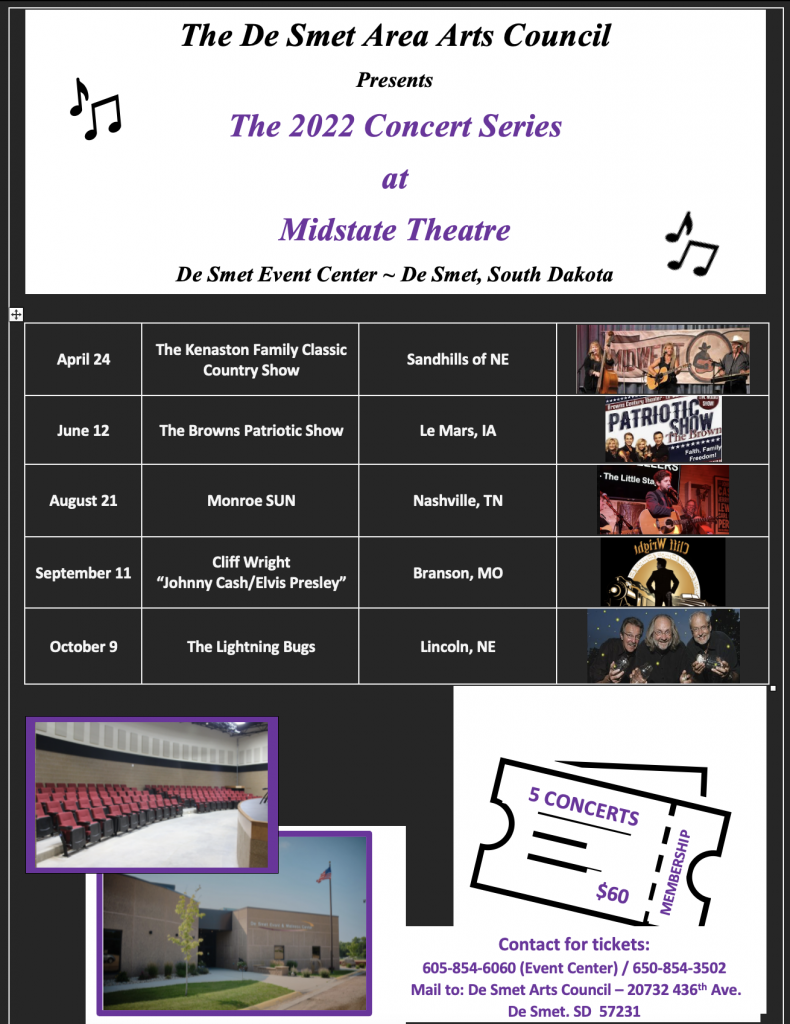